Ms. Shawna A. Atkins is a co-owner and the Architectural Historian of SPARC.  She is a member of the Register of Southeast Chapter of Architectural Historians and Vernacular Architecture Forum.  Ms. Atkins has a B.A. in Art with a Minor in Social Science from Northwestern State University (NSU) in Natchitoches, La (2002); and a M.A. in Studio Art, with a concentration in Painting and a Research Focus in Folk Art, from NSU (2004).  She has completed 13 continuing education credit hours in the Masters of Preservation Studies Program at Tulane University, New Orleans.

Ms. Atkins has worked in the humanities for 15 years. During graduate school, she had an internship at Williamson Museum (NSU) which continued post-graduate with a professional services contract with the Louisiana Regional Folklife Center in Natchitoches.  She has taught art classes as a graduate student and as an adjunct professor.  Ms. Atkins worked at the Natchitoches Newspaper creating graphics and conducting research for the Natchitoches Times and Historic Natchitoches Magazine.  She has worked as an architectural historian for eight years and has field experience in Louisiana and Mississippi.

Ms. Atkins has ten years of experience in Cultural Resources Management.  She meets the Secretary of the Interior’s (SOI) professional qualifications (36 CFR 61, Appendix A) for Architectural Historian and the standards of the professional guidelines established by the U.S. Department of Interior (48 Fed. Reg. 44.716).  She has completed over 30 standing structure surveys, documenting and evaluating over 1500 standing structures using SOI standards for photography.  She has co-authored more than 30 technical reports and Section 106 compliance documents, including several measured drawings of ruins and artifacts. 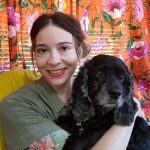